We're pleased to share the Grand Jury Prize for Animated Short from the 2012 Atlanta Film Festival! 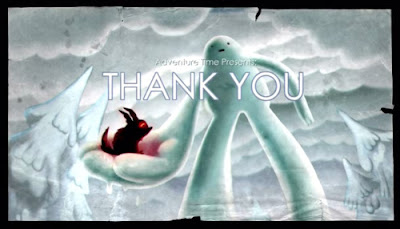 Animated Short
Grand Jury Prize Winner
Thank You (USA)
Director: Pendleton Ward
A snow golem is attacked in the forest by his species' mortal enemy, a pack of fire wolves, who accidentally leave a cub behind after their retreat. The golem's solitary life is then thrown comically into chaos as he attempts to care for the cub while fighting danger to reunite the cub with its family. The story of “Thank You” is by Pendleton Ward, the creator of Cartoon Network's hit animated show, “Adventure Time” and storyboard artist, Tom Herpich.
From the ATLFF Press Release -
Charles Judson, Head of Programming and Festival Director said, “My team and I had a difficult task of creating a program from over 2,200 films this year, nearly 500 more films than our best year. Once we’ve selected programming, it’s our job to step back and let the films speak for themselves and they did that spectacularly. The reception this year’s films received from audiences and visiting filmmakers was overwhelming. We’re looking forward to seeing these films have a life far beyond this year’s ATLFF and their festival runs.”Twenty-five features representing seven countries competed for the Narrative, Documentary and Pink Peach Grand Prizes. Known for its shorts programming, over 80 shorts and music videos competed for ATLFF’s Narrative, Documentary, Animated, Pink Peach and Music Video Grand Prizes. Academy Award® qualifying categories, the Narrative and Animated Short winners are now eligible to submit their films for consideration for the 2013 Academy Awards®.
##
And while you're at it, check out this animatic: