Film screening at the Center for Puppetry Arts 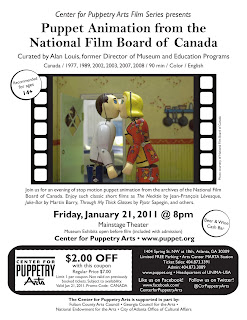 The Center for Puppetry Arts' next film screening on Friday, January 21: Puppet Animation from the National Film Board of Canada. The event for it on Facebook: http://www.facebook.com/event.php?eid=182212398467996&index=1.

Film Screening at the Center For Puppetry Arts

Puppet Animation from the National Film Board of Canada (http://www.puppet.org/perform/puppetanimationfilm.shtml)

Join us for an evening of stop motion puppet animation from the archives of the National Film Board of Canada. Enjoy such classic short films as "The Necktie" by Jean-François Lévesque, "Juke-Bar" by Martin Barry, "Through My Thick Glasses" by Pjotr Sapegin, and others.